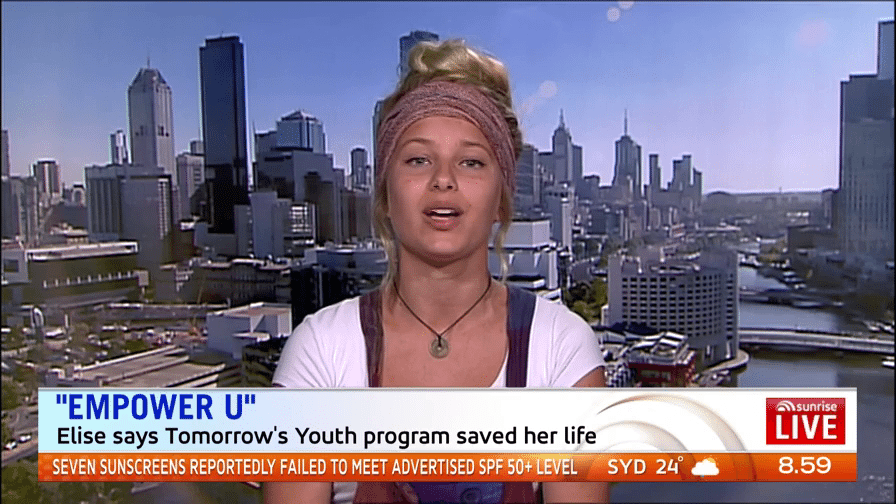 It’s been 15 years since the launch of Tomorrow’s Youth’s first ever Empower U Program, and we’re not slowing down! Research shows that 51% of teens prefer to communicate digitally rather than in person (even with friends) and 43% of 18-24 year olds say that texting is just as meaningful as an actual conversation with someone over the phone. Because of this, it is more important than ever to build strong communication skills and emotional intelligence in teenagers.

Empower U is designed to teach teenagers and young adults practical skills on how to communicate effectively, set and achieve their goals, take control of their lives and embody a new sense of self-worth, direction and empowerment. Since the launch of the first program, the change in youth behaviour has been made so apparent, most notably due to social media, and what has now been coined “screen addiction”.

One of our graduates, Elise Marcianti, who was recently interviewed on Sunrise (as seen below), has spoken about how Empower U has helped her take control of her life and has given her healthy habits around using social media. Elise is a survivor of Anorexia Nervosa, and social media had a huge negative impact on her during that time. Elise said,

“Social media is so damaging for people suffering from eating disorders. No matter how hard I tried when I lost weight, there would always be people on social media that I could keep striving towards, but never get there.”

Empower U was the catalyst for change for Elise, “Empower U was a massive turn around for me, and it wasn’t only that weekend it helps you and gets you motivated, but it sets you up long term too.” Empower U helped Elise on her road to recovery and to commit to keeping herself happy and healthy by giving her strategies to have healthy habits around social media.

We are living in an increasingly digitalised world, where technology will continue to have both positive and negative impacts on young adults, and where parents play an important role in monitoring and managing these impacts. Research shows that 65% of parents with teenagers confiscate phones or remove Internet privileges as a form of punishment. But instead of using tech-devices as a means of behavioural control, such as reward or threat, we need to be educating our future generations on how to combine quality use of technology with emotional intelligence.

Parents also play a vital role in how their teenagers value the use of technology. Parents should be positive role models, which means nurturing meaningful parent-teen and teen-technology relationships. It’s important not to encourage kids to think about screen time in terms of gratification alone. Instead, it should enhance learning, help develop one’s sense of self, or facilitate positive connections.

Positioning non-screen time as an equally attractive use of time is also important. Like everything, technology-use is about balance, so encouraging, educating and empowering our teens to actively make their own decision to value the present, to be independent and confident in communicating face-to-face, are invaluable tools to imbed.

However, the change in youth behaviour is more powerful and sustainable if teens feel they’ve made the decision independently. It’s important to introduce and set challenges with your teens. The challenge could be not looking at your phone for the first and last 30 minutes of each day, turning off notifications during school/homework time, or having a technology-free day with the family once every few weeks. It’s important to have an open dialogue about how everyone is feeling during these challenges and understand that it’s not an overnight change, but a total perspective shift in what is truly valuable, remembering that growth and change takes time and that some days will be easier than others.

Empower U programs will be held across Australia within the next 6 months:

To book into the next program visit: www.tomorrowsyouth.com.au/book-seminar